The revenue of Amazon Web Services (AWS) increased 33 percent on an annualized basis to $10.22 billion in the first quarter of 2020.

Alibaba, Google, IBM, Microsoft and Oracle all continue to trail AWS even as its growth has slowed. Microsoft, which is considered the No. 2 cloud infrastructure provider, doesn’t disclose revenue, though it said on Wednesday that revenue from the Azure cloud grew 59 percent in the quarter, CNBC reported.

AWS has delivered 13.5 percent of Amazon’s total revenue during the first quarter of 2020. AWS, launched in 2006, is bigger than Oracle, which was founded almost 30 years earlier. Oracle reported quarterly revenue of $9.8 billion.

Operating income from AWS totaled $3.08 billion, which was up 38 percent. That works out to 77 percent of Amazon’s overall operating income.

AWS announced cloud deals with 3M, Bundesliga and Carrier during the first quarter of 2020. 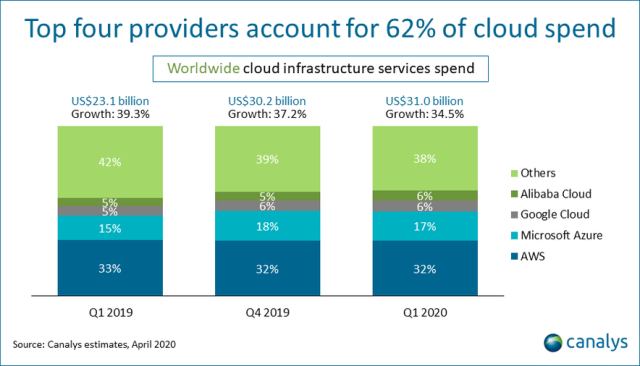 Canalys said cloud service providers have felt the negative impact of a slowdown in large consulting-led projects, including SAP migrations, hybrid cloud deployments and other transformational projects. Cloud investment in the worst-affected vertical segments, such as hospitality, aviation, construction, tourism and manufacturing, is being scaled down or delayed.

Synergy Research Group said that Q1 spend on cloud infrastructure services reached $29 billion, up 37 percent from the first quarter of 2019.

Canalys said Cloud infrastructure services spend hit yet another record in Q1 2020, growing 34 percent to $31 billion. Growth in cloud services was driven by organizations around the world moving to remote working as the COVID-19 pandemic hit.