Cloud infrastructure services spending in China increased  43 percent year on year to US$7.2 billion in Q3 2021, according to Canalys. 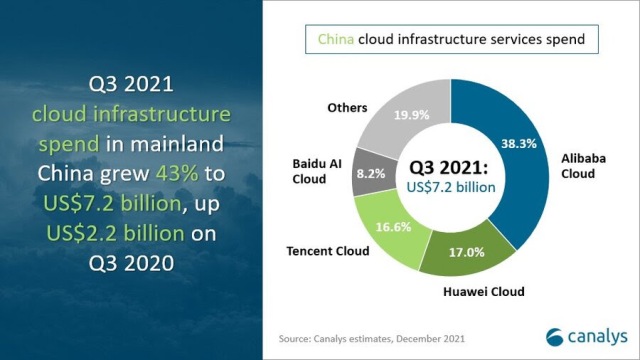 However, Microsoft Azure and Amazon Web Services have both stated their intentions to expand their presence in mainland China through existing partnerships with local companies.

ByteDance has announced its entry into the enterprise cloud computing market through its Volcano Engine brand, adding to the competition.

As a result, the main Chinese cloud service providers are concentrating their efforts on expanding their  foreign data centres, particularly in Southeast Asia.

The Internet, financial services, and retail industries all contributed to the company’s 33.3 percent yearly revenue increase.

With a 17.0 percent market share, Huawei Cloud was the second largest provider.

It increased its revenue by 49.1 percent year over year, focusing on the development of new products and solutions, including enhanced interoperability with Huawei Mobile Services.

With a 16.6 percent market share and 49.5 percent growth, Tencent was the third largest.  It accelerated its growth by securing relationships with major ecommerce and finance clients.

Baidu AI Cloud came in fourth place with an 8 percent market share, up 64.7 percent year over year,  thanks to a rising customer base in the Internet, media, financial services, energy, industrial, and government sectors.

Baidu’s Smart Cloud industrial Internet initiative, which is being implemented in various cities across mainland China, has also been a success.

AWS has announced the expansion of its Ningxia region, as well as the launch of a new availability zone iin Beijing later this year.

Microsoft has revealed that new data centres in China will double Azure’s capacity by 2022.

“The fact that mainland China is the world’s second largest market is largely responsible for the increase in interest from US-based hyperscalers,” said Canalys Research Analyst Blake Murray.

“This is in addition to its standing as one of the world’s fastest expanding markets due to its rapidly digitalizing economy.”

Though there are obstacles, such as the requirement for non-domestic businesses to form partnerships in order to reach mainland China’s market, the benefits exceed the costs.”

Alibaba and Tencent have began international growth, focusing on Southeast Asia, after establishing a significant foothold in mainland China.

New data centres are being built by Alibaba and Tencent in Indonesia, Thailand, and South Korea.

Huawei Cloud has added new availability zones in Thailand to grow its portfolio of services in Singapore, Hong Kong and Malaysia. Alibaba Cloud, for example, is investing US$1 billion over the next three years to develop digital skills in startups and individual developers in Southeast Asia.