# A larger instance size (r6i.32xlarge) with 128 vCPUs and 1,024 GiB of memory that makes it easier and more cost-efficient to consolidate workloads and scale up applications

# Up to 15 percent improvement in compute price/performance

# Up to 20 percent higher memory bandwidth

R6i instances are SAP-Certified and are ideal for workloads such as relational and noSQL databases, distributed web scale in-memory caches like Memcached and Redis, in-memory databases like SAP HANA, and real time big data analytics like Hadoop and Spark clusters.

Built on the AWS Nitro System, a combination of dedicated hardware and lightweight hypervisor, R6i instances deliver practically all of the compute and memory resources of the host hardware to the customers’ instance.

R6i instances provide two new sizes (32xlarge and metal) with 128 vCPUs and 1,024 GiB of memory, which is 33 percent more than the largest previous generation R5 instance. They  provide up to 20 percent higher memory bandwidth per vCPU compared to R5 instances, AWS said.

Availability and Pricing
EC2 R6i instances are available in four AWS Regions: US East (N. Virginia), US West (Oregon), US East (Ohio), Europe (Ireland). Customers can pay for what they use. For more information, see the EC2 pricing page.

AWS is the #1 cloud service provider well ahead of Microsoft and Google Cloud in terms of revenue share.

Delta Air Lines to use Amazon Cloud for digital transformation 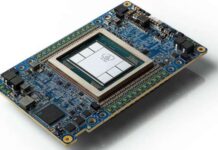