Rackspace helps companies migrate their data to Amazon Web Services, and the investment would strengthen the ties between the two companies. Rackspace also migrates companies to Alphabet’s Google Cloud, Microsoft’s Azure and VMware.

Rackspace, which is majority-owned by private equity firm Apollo Global Management, leases server space and helps corporations store and access data in the cloud. It was acquired by Apollo in a $4.3 billion leveraged buyout in 2016.

The San Antonio, Texas-based company has market capitalization of more than $3 billion, almost as much as its debt pile.

Amazon’s cloud services is thriving on higher demand from companies switching to virtual offices amid the coronavirus outbreak. Its revenue from Amazon Web Services, which sells data storage and computing power in the cloud, rose nearly 29 percent in the second quarter to $10.81 billion.

If Rackspace bring in Amazon as an investor, it would be the second Apollo-owned company to secure such a deal with a major technology company this year.

Earlier this month, Google revealed it picked up 6.6 percent stake in ADT for $450 million, betting on the home security company’s strong customer base and an army of technicians to drive sales of its Nest devices.

Apollo had acquired ADT in a nearly $7 billion deal in 2016, and still owns a majority stake in the company. 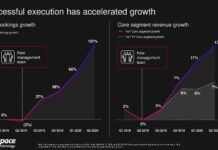