Infotech Lead India: Since NR Narayana Murthy will be back in action as the new chairman, Infosys, India’s #3 IT exporter, can look inside to find future growth opportunities.

Infosys says “Geography becomes History” with reduced telecommunication costs. But Infosys should not be part of the history for wrong reasons. The IT company can work on several aspects.

Despite market cap of $30.6 billion and cash & cash equivalents at $4.4 billion, Infosys did not buy opponents. It has followed a very cautious M&A strategy in the past.

Infosys did not acquire major companies to grow presence in foreign markets. During the slowdown in the recent past 3-4 years, several overseas IT service companies tried to enhance their presence geographically and reduce cost pressure thanks to their acquisition strategies.

See the mounting pressure from competition. 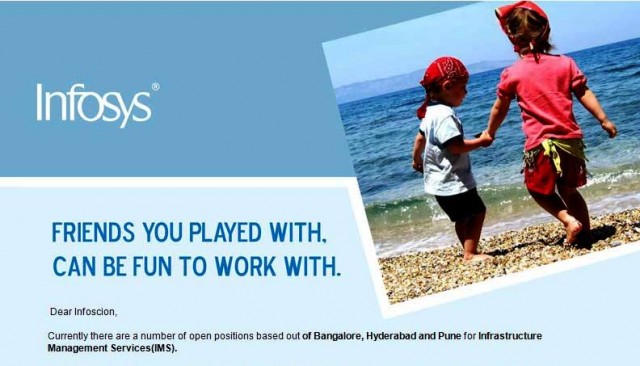 Infosys has 69 sales offices and 87 global development centers to operate in 35 countries globally.

Infosys gives top priority for people. But the IT major did not win any significant Best Employer Awards in India in the last 3 years as per its quarterly presentation to IT analysts. In 2010, Infosys received the most preferred company to work for in India from Business Today magazine.

Both the number of people and marketing and sales did not grow significantly in the last 3 years. In FY 2011, sales and marketing expenses were $332 million when it had 1001 employees in the division.

The sales and marketing expenses rose to $373 million in FY 2013 from $366 million in FY 2012 when its employees grew to 1,263 from 1,132 during the same period. Marketing and sales were a weak area and the brand image has taken a beating during the current CEO’s time.

Services market (including BPO) estimated at $108 billion in 2013, exports to grow to $87 billion in FY 2014. Infosys want to grab a major pie. But Infosys may not do it if it continues to promote talent within the company without giving thrust on external talent.

Also, in the last 10 years, Infosys did not beef up top management by hiring from competition or other related IT companies. Most of the top leaders at Infosys have joined the company in 1999 or before.

Interestingly, Infosys has 156,688 employees from 100 nationalities. But its top leadership (executive council) is predominantly from India.

Under the new chairman, Infosys may take a relook at its current strategies.