InfotechLead
Home BPO How IT service cos will be impacted by suspension of fresh H-1B...

The temporary suspension of issuance of fresh H-1B visas and L-1 visas till December 2020 in view of the impact of Covid-19 pandemic on US economy and employment will be mildly negative for the Indian IT Services sector, says ICRA.

However, the suspension will not affect those already in the US on the visas. The action followed an earlier directive by the US Government in April 2020 putting non-immigration visa such as H-1B visa for review to protect and prioritize local employment in the United States.

Currently, Indian IT Services is the major beneficiary of the H-1B visa program. USCIS issued 388,403 H-1B visas during FY2019 (October 2018 to September 2019 period) including fresh and renewals of which share of India stood 71.7 percent.

Typically, the initial visa is offered for an initial period of up to three years and is renewable for an additional three years. The H-1B is renewed for visa holders who have applied for a Green Card through eligible foreign employers and whose application is pending approval. The number of new annual H-1B visas is capped at 65,000 with an additional 20,000 for highly-skilled labour with a master’s or a higher degree from a US university.

With the visa issuance norms being tightened in USA by restricting the entry of entry-level programmers coupled with increasing compliance and evidence requirements adding to cost pressures, Indian companies have started to ramp up onshore hiring in USA.

USCIS has significantly increased the Request for Evidence (RFE) before issuing H-1B visas leading to higher compliance costs. The percentage of completed case with Request for Evidence increased from 22.3 percent in FY2015 (Financial Year refers to October to September period) to 40.2 percent in FY2019. A RFE is generally issued for want of more information before granting final H-1B visa and adds to compliance costs for IT Services companies.

The top 7 India based companies had 6,855 H1-B petitions for initial employment approved in FY 2019, decline of 63 percent (Exhibit 3). The top three reasons for denials of H-1B applications, according to the USCIS, are inability by the sponsor employer to establish that the position is a specialty occupation, inability to substantiate a valid employer-employee relationship (including the right to control) and lack of evidence of specific assignment at third party sites for the entire visa durations requested.

As a part of review of H1-B visa program, the US Government is likely to replace the lottery-based system with merit-based system giving priority to highest salary applicants. There were approximately 225,000 applications for 85,000 H-1B visas to be issued in FY2021 (October 2020 to September 2021) making the programme intensely competitive.

On an average, Indian IT Services companies pay higher than the minimum wages as per ICRA research though the proposed change will lead to higher onshore hiring for mid-level programmers who may not qualify for the visas based on new rule. Indian IT companies had already ramped up entry-level programmers in the past owing to tighter H-1B visa regime by USA, as explained above.

The temporary suspension of H-1B visa program till December 2020 will hamper execution of pipeline and new projects coupled with margin impact resulting from higher onshore hiring.

The demand for new H-1B visa in 2020 was dampened by Covid-19 which has led to lower new deals, slower pace of execution of pipeline contracts and travel flight restriction. Employee costs form 55 percent-60 percent of the revenues for Indian IT Services Companies with majority of the same incurred for onsite work. Change in selection process will lead to higher onshore hiring for mid-level employees in the medium term.

As per ICRA estimates local hiring onshore costs 25-30 percent more compared to H1B visas and will be detrimental to margins of IT Services companies. With temporary suspension of H-1B visa along with proposed change in H-1B selection process impacting margins, Indian IT companies will focus on increasing the offshore component to manage disruptions caused by temporary suspension coupled with higher usage of automaton, artificial intelligence in the medium term to manage higher onsite hiring costs. 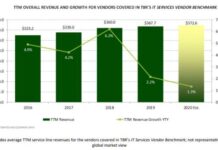 How IT service companies will perform during coronavirus