HCL Technologies today announced the appointment of Roshni Nadar Malhotra as the chairperson. 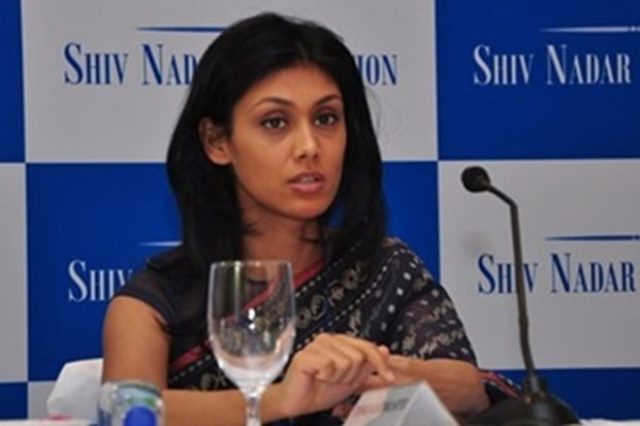 Roshni Nadar, who is the richest woman in India, will replace father and billionaire Shiv Nadar for the top job in Indian software firm.

Roshni Nadar came on the board of $8.9 billion HCL Technologies in 2013 and was vice chairperson. She will continue as CEO of HCL Corporation, the holding company for all the group entities.

HCL Technologies announced that its founder and chairman Shiv Nadar stepped down from the role.

Shiv Nadar, however, would continue to be the managing director of the company with designation as chief strategy officer.

HCL Technologies CEO C Vijayakumar said this was part of the company’s succession planning exercise. Roshni Nadar studied at Vasant Valley School, Delhi and graduated in communication with a focus in radio/TV/film from Northwestern University, Evanston, Illinois. She also pursued MBA from Kellogg School of Management.

She worked with Sky News UK and CNN America as a news producer before joining HCL Corp in 2009, and within a year was made executive director and then CEO at the age of 27. According to the company website, Shiv Nadar is the chairman of the $9.9 billion HCL Corp. HCL Group includes HCL Technologies, HCL Infosystem, and HCL Healthcare, PTI reported.

Roshni married Shikhar Malhotra, vice chairman of HCL Healthcare, in 2010 and the couple has two sons — Armaan and Jahaan. According to the latest Hurun Rich List, Roshni is India’s richest woman with a net worth of Rs 36,800 crore. In 2019, she ranked 54th on the Forbes World’s 100 Most Powerful Women list.

HCL recognized as a leader in AI services by IDC MarketScape

HCL to hire 1,000 technology professionals in the UK