“Our Transformation Services and Intelligent Operations, are unlocking many opportunities for us to win new logos as well as increase penetration with existing clients, including more sole-sourced deals,” said Genpact CEO Tiger Tyagarajan.

Genpact is aiming to achieve revenue of $2.93 billion to $3 billion with operations income margin of approximately 15.8 percent in 2018. 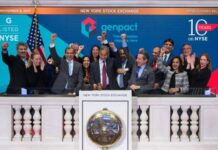 Genpact to add sites in Costa Rica and Mexico for Walmart