Enterprise IT vendor IBM has received 7,534 patents in 2014, topping the annual list of U.S. patent recipients.

IBM is well ahead of technology companies Samsung, Microsoft and Google.

The year 2014 will be marking the 22nd consecutive year that the company is leading the patent list.

IBM inventors earned an average of more than 20 patents per day in 2014. 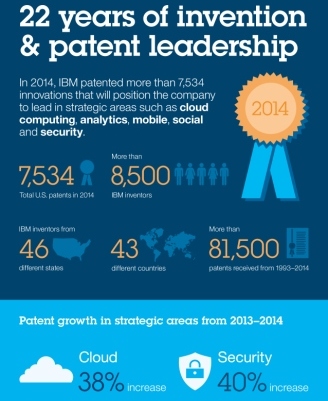 “IBM’s continued investment in research and development is key to driving the transformation of our company, as we look to capture the emerging opportunities represented by cloud, big data and analytics, security, social and mobile,” said Ginni Rometty, IBM’s chairman, president and CEO.

IBM said more than 3,000 patents – 40 percent of its annual total – were for cloud computing, analytics, mobile, social and security inventions.

Over the past five years, IBM has more than doubled its output of patents within these strategic growth areas and was the leading recipient of cloud, analytics, mobile, social and security patents during this period.

Some of IBM patents:

U.S. Patent #8,869,274: Identifying whether an application is malicious

More than 8,500 IBMers residing in 46 states and territories and 43 countries are responsible for IBM’s patents last year. IBM inventors who reside outside the U.S. contributed to more than 34 percent of the company’s patents in 2014.